Legacy Wharf is part of an ongoing series of work made in response to urban regeneration and the growing number of top down, generic, housing developments appearing across the London skyline. The work was filmed in a new residential district in East London near City Airport. The sequence of shots investigates a space in transition, part built with some residents having already moved in and part under construction. This is a place designed and built by developers that sells lifestyle with a feel good factor. Billboards displaying architect’s images reinforce a sense of community, connectivity and destination. Balconies present aspirational spaces to watch aeroplanes take off and land.

The work is set at twilight, a time of 'in-between- ness' when the light has the power of turning the ordinary into something transformative.  An aeroplane takes off into a large pink illuminated sky that promises optimism but as the sun slips segues into the recessed interiors of apartments. Windows light up generating an unshielded natural surveillance into the everyday worlds of strangers. Few windows have blinds or curtains, revealing stark and sparsely furnished homes. The camera observes these unremarkable scenes. Liminal instances that have been cropped and framed- solitary people absorbed by screens, washing hanging up to dry, a man pointing to a wall whilst above him a towering crane appears to make him small, almost miniature.

Branding and marketing is common place in the development. Two very different billboard images are used at the beginning and end of the video. At the start, a fantastical golden sunset showing the sweep of the Thames basin lined with gleaming apartments and at the end a cropped image of an isolated eye, part obscured. Between these images spins paradoxes that play on speculation and reflection. The reality of the billboard image is questioned through the films unfolding of its artifice.

Set to a soundtrack by Nick Harpley the confluence of image and sound aims to dislocate the work from its original context, and dismantle it from the observational ‘here and now’ into a place that is uneasy and other worldly. 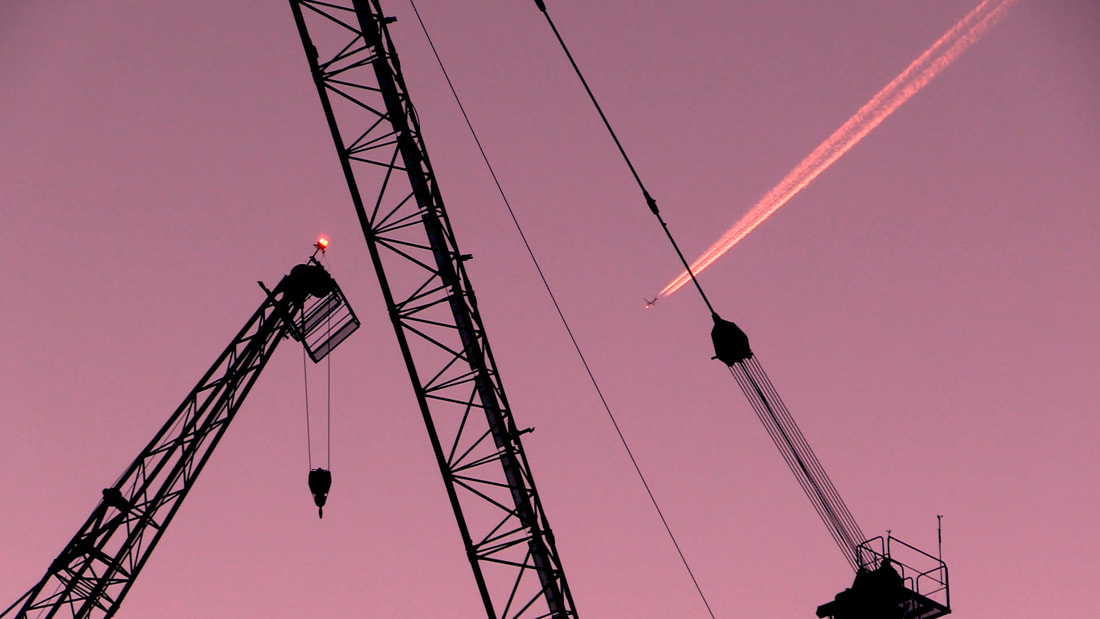